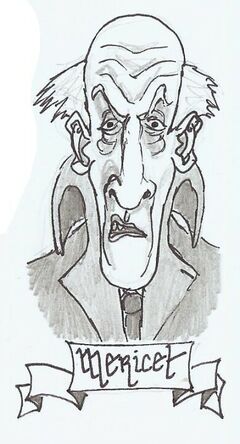 Mericet, as drawn by Matt Smith

Mr Mericet is an Assassin who teaches Strategy and Poison Theory. He is the Master of Cobra House, and a more dusty, dry old stick you couldn't imagine. He's like the Latin Master you had at school and was the bane of most of the Trainee Assassins' lives. There are whispers in the Guild of Mericet's skill, and he broke all the records in his time. They say he has even killed one of the past Patricians. During the events at the beginning of Pyramids, Teppic's journey to his assignation is beset by dangers, all of which have been set up by Mericet.

Reading Twurp's Peerage is mandatory for all of his students; he calls it the "Guide to the Turf" - as you can imagine, nobody but himself laughs about this great pun.

He does not approve of new-fangled methods of inhumation, such as pointing your crossbow at the wall and having the bolt ricochet until it hits the target.