The Discworld Series consists of several "sub series". These centre around certain (groups of) characters, for example, the Watch Series centres around the Ankh-Morpork police force. The books aren't labeled according to the series they belong to, and the books can be read and enjoyed without reading them in order (phew!). But to get the most pleasure out of them, reading the books in their proper order is best.

Which book to start with is a common question, with many answers. There is a difference between earlier books as opposed to later books and the balance swings from "lighter" to "darker" and back through the series.

Generally, the following books are recommended to start with:

If you know someone who likes theatre, they might prefer Wyrd Sisters or Maskerade. Music lovers will enjoy all the references in Soul Music, while the cinéastes will probably enjoy Moving Pictures.

And, of course, you can also choose simply to read the books in publishing order, starting at The Colour of Magic. For a complete list of the books with links to their pages, see Bibliography. 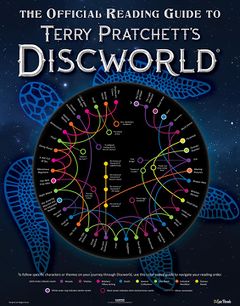 In 2015 HarperCollins released an official reading guide for the Discworld novels, though rather than suggest a full order to read the books in, it links the works that are most connected e.g. the Witches series.

"...I find it now rather embarrassing that people beginning the Discworld Series start with The Colour of Magic and The Light Fantastic, which I don't think are some of the best books to start with. This is the author saying this, folks. Do not start at the beginning with Discworld." (Terry Pratchett in 'Straight from the Heart, Via the Groin', included in A Slip of the Keyboard.)