Soul Music was the first full length adaptation of a Terry Pratchett Discworld novel, based on the book of the same name, in 1997.

The plot follows the same as the novel Soul Music, seeing Death attempt to forget after Ysabell and Mort's deaths, leaving his granddaughter Susan Sto Helit to take on the duty of being Death.

Additional features on the DVD of Soul Music: 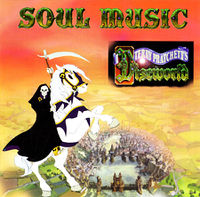 The songs played by The Band With Rocks In were released separately to the tv-series as a CD by Pluto, credited as being written by Keith Hopwood and Phil Bush.

The screenplay of Soul Music was released as a separate book, which was illustrated with images from the TV series.