Would he be a Quirmian of the sort who announces his mayorality with a red, white and blue sash of office? Just wondering. oh, and he'd have a bust of whoever the Discworld version of "Marianne" is. Emphasis on "bust", naturally. But as the feminine embodiment of Quirm, she would count not just as Art, but also as patriotism. AgProv (talk) 10:56, 14 November 2014 (UTC) 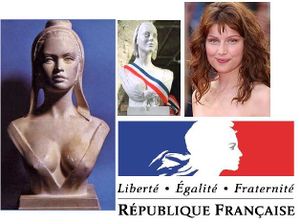 The patron spirit of Quirm, embodied as a woman, but still subject to the artistic rule concerning strategically placed gauze

The embodiment of the spirit of France made flesh. A bust of her is to be found in every Mayor's office in every departement. Periodically a leading actress is chosen to become the new Marianne. Currently the post-holder is model and actrice Laetitia Casta. (pictured) upon whom current representations are based. One wonders who the Quirmian version is. There must be one! The Mayor of Quirm must respect this time-honoured custom? AgProv (talk) 11:11, 14 November 2014 (UTC)

The Mayor of Quirm followed Sam Vimes' gaze across the office. He had the good grace to look shifty.

"Mais oui, mon Duc. But there must always be a Marie-Eclaire. Some things are traditional, vous comprendez?"

Vimes shook his head. The mandatory statuette of the spiritual embodiment of Quirm was, in this case, lacking in the stern haughty grace the role required. Yes, she had the decollétage the role demanded. She had this and to spare. Together with the dishevelled look and the artistically disarranged chemise that really needed to be tucked up a little. Apparently the original Marie-Eclaire had been so intent on storming the Bastille that she hadn't noticed the little wardrobe malfunction. She had had other things on her mind, evidently. But this Marie-Eclaire appeared to be fully aware her chemise had slipped and was conveying the impression she wasn't bothered. Get an eyeful, boys. Her toothy grin made Vimes feel it was following him around the office.

The Mayor adjusted the set of his tricoloured sash of office.

"We are aware we need to audition for a new Marie-Eclaire. Periodically, a woman of outstanding beauty is selected. An actrice, peut-etre, or a beautiful model. we take the point of view that if a likeness is to be disseminated across Quirm, it should be such a one who is easy on the eye, ne c'est pas? "

Vimes nodded. That made sense, to a Quirmian frame of mind.

"And it has now been nearly fifty years since the esteemed Leonard of Quirm sculpted this Marie-Eclaire for us. This is the original, of which we are proud. The model is apparently Marie-Eclaire d'Ogg, a... remarkable beauty... in her day."

"Just so, mon Duc. I believe in Ankh-Morpork, you have Morporkia, whose likeness graces the City as its patron spirit? And that your wife, the most gracious Lady Sybil, is the life model? We do things a little differently in Quirm." AgProv (talk) 11:32, 14 November 2014 (UTC)