Just to create the page! Male, too old, should have grown up gracefully but hasn't. Originally from the Flintshire region of Llamedos and functionally illiterate in several languages, including Welsh. (You know you're multi-lingual when you can pull off typos and spelling errors in more than one language).

just noticed the article count stands at 3,910. Another ninety articles will therefore get it up to 4,000. I have the Diaries and Yearbooks now, or most of them. And then there are quite a few redlinks to kill. Research beckons. Ninety new pages. Hmm. This may be doable.

Did it! After an estimated 84 new articles and ten day's effort - seven or eight articles of the necessary 90 came from other people and just to be sure I went up to 4,001 - on Saturday 30th July 2016 with Dwarf Chocolate. As Old Dickens said, not the most palatable of topics, but there it was in the The Compleat Discworld Atlas as a previously overlooked snippet... chocolate looking and sounding suspiciously like Toblerone which is hard and unyielding enough to be used as a weapon of war and which, as a bonus, carries an advisory warning of May Contain Nuts. (Almonds... possibly the sort that interest the Assassins?)

Can we make it 5,000 any time soon? Lots of scope with 1100 empty pages! (of which maybe 500 are feasible? After eliminating duplicates, extremely slight subject topics where you'd struggle to add three or four words, all those links to the German wiki, and the downright strange) and there are lots of odd corners in the published books which need to be explored.

A lot of Christmasses, all at once

A noble and mighty gift. From a fan of my fanfic writings who wishes me to have the best research sources. I'd given up all hope of actually physically seeing any of these - so getting them in this condition and for free is generosity indeed! I won't embarrass the person by naming them as I suspect they contribute here under a pen-name. Suffice to say the gift is from a fine and lovely city in Kent, where pilgrims to the Cathedral have been fleeced and shaken down by the Guild of Priests and local Dibblers ever since Chaucer and before. And yes. I do know (1) my German is going to have to get a lot better so as to deal with the Assassins' Handbook; and (2) the informal price is my completion of at least two named fics. Consider this commenced. Thank you.

Just bought my copy of The Compleat Discworld Atlas. Any observations, annotations or flights of fancy will have to wait a few days, though. Herself basically said "go out and buy something for yourself that I can wrap up and say it's from me when we open presents in front of the family. You can go up to £25." How could I say no. Bought it, refrained from looking, presented it to herself for wrapping. Apart from this one fleeting glimpse I won't see it again till Friday. But something to look forward to on the day when surrounded by inlaws and outlaws!

for now. Too tired and needing my bed. looks interesting: New Discworld game 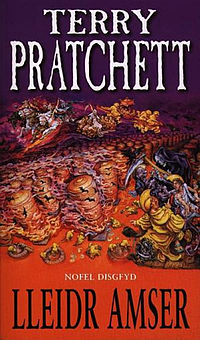 I've bought this book . As we're discussing translations of Terry (albeit in Polish, for now). I should write a review . I'm too lazy at the moment. My time is indeed being stolen. "Gohuriaeth yw lleidr amser!"

It's interesting that time spent on newspapers and press release work trained Terry to write in short, pithy sentences (at least up to about Unseen Academicals and The Science of Discworld IV: Judgement Day, when he got an urge to start rambling a bit). These lend themselves extraordinarily well to translation into Welsh - TP's deceptively simple, straightforward narrative style is a translator's gift. It's like "Basic English" only with a much expanded vocabulary. so far this is the only Welsh Discworld novel, so a lot of recurring characters, who don't appear in this book, don't have Welsh names yet - a Welsh-language wiki would be a very spare one. But a note or two on those who do...

The German translation doesn't bother; here she is still Myria LeJean. She is also Dame Myria Ligion in the Disquemonde.

Just bought my copy of A Blink of the Screen

And there is much to discuss. And to think I deliberately did not shell out £20 on the hard-back because I thought I'd read most of it before, elsewhere... £7.99 paperback.

Thought about this for some time. Translation conventions for people, places, and things in the Discworld. Just experimenting: 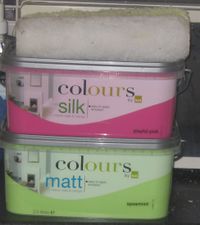 Life imitates art! Totally independently of each other, Herself and Myself each picked a colour to redecorate the house with.... these are not going in the same room, btw, she wants a coral pink feature wall in one room, I'd quite like spearmint green in another... but here we bloody well are, pink and green again... Go, Dimmers!

Trying to get into the new book. Really trying. The scientific bits are, as usual, challenging going, but once you grasp what they're getting at, it actually gets quite interesting. But the Discworld story, so far, is... well, lacklustre. It doesn't even feel as if he wrote it, if you see what I mean. It reads like second-division fan fic. The sort that isn't bad, tells a decent story, the characters are in context... but the author only gets the classic Terry Pratchett voice here and there in little flashes of brilliance. If anything, the Margery Dawes bits (and why does that make me think of Matt Lucas dragged up) read as if they're in the Felicity Boodle voice TP devised for The World of Poo. I really, really, hope it improves.

And it used to be said about Terry that he avoided the "plots-r-us" school of dialogue. His dialogue between characters here not only appears to take the place of plot, the speeches are far too long. Dialogue sequences used to be short, pithy and bang-bang. Now there are whole paragraphs of character-led exposition. Rincewind does not sound like Rincewind; the Dean is not the Dean. What's gone wrong? Was Terry just content to write an outline script and then let others - Rob Williams or Rhianna Pratchett or both - fill in the details? There are moments of the old Pratchett genius - his description of how Vetinari can force a crowded room into silence just by sitting there is excellent - but there are just too few of them. So far.

And Sally von Humpeding leaps straight from Lance-Constable to Captain without seemingly going through any intermediate ranks? Sorry, can't buy this. It took Angua years and even Carrot didn't make it all the way in one go. 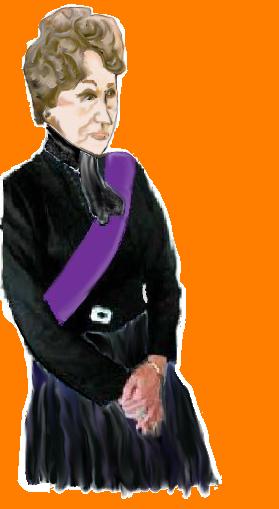 This is a visualisation of one of my original characters in fanfic, one of the new generation of teacher-Assassins brought into the Assassins' Guild school to deal with the influx of girl pupils. this is a first go at classroom monster and teaching veteran Joan Sanderson-Reeves, professional teacher and, until the Guild caught up with her, successful freelance poisoner. With long experience in administering unorthodox food additives and really exotic herbs and spices, she is now Domestic Science teacher to pupil Assassins. She appears in several of my stories and has a starring role in "Murder most 'Orrible".

("Domestic Science at the Assassins' School, where whether you add almond essence is truly a life-or-death choice. Joan the teacher confiscates a copy of the "Tanty Bugle". And her past comes up to meet her...")

Drawn in pencil and coloured using MS Paint and Gimp.

This is a link to a visualisation of one of my Discworld characters - well, Terry's character, really, but outside a name and a job description she's just a placeholder. For some reason I haven't been able to post my artwork here, but here's a link to it and thus to my portfolio on deviantArt:-

Not perfect, and with some glaring flaws, but now I have the bug I intend to so more to accompany the writings. As this is 95% my interpretation of the character and comes out of fanfic rather than canon, I have deliberately not placed this on the appropriate Wiki page. Drawn for the DeviantArt site and the Fanon Wiki, this is my interpretation of Terry's barely-there character Miss Smith-Rhodes. It hasn't quite got there and some aspects of the drawing are slightly out, but this is the adventuress from Rimwards Howondaland and Assassins' School teacher-with-a-litupa. (note purple sash denoting teacher. Something of a maverick in that she favours dressing in veldt-chic and not in the approved black - with something she does call a big knife, and dressed in bush khaki as if she were at Home in the Gods' Own Country - she has points in common with Crocodile Dundee.) Or at least, a first draft of how she appears in my mind.

More attempts to sketch and draw the Lady Assassins will follow. I have two in preparation, although both are completely non-canonical.