I believe the current Patrician once asked Nobby if he was one of the Dwarfs (in Feet of Clay), that would suggest that Nobby has the appearance of a short dwarf with many boils. (Using the HarperTouch Edition of Feet of Clay). Marz 07:38 03 February 2008 (EST)

I like to think that he got his declaration of being human because he kept saying that he was and everyone kept saying [citation needed] --T.M.S.I.D.R. Schnapper (talk) 10:09, 2 December 2021 (UTC)

I've noticed a fair number of articles on characters being moved to indicate their full name, such as the recent change of the Bledlow Nobbs article to the name Alphonse Nobbs. Should we move this page to 'Cecil Wormsborough St John "Nobby" Nobbs' and just turn the 'Nobby Nobbs' page into a redirect? Or would that be too much trouble for the small accuracy increase?

No, it's first name/last name. No titles, honorifics or middle names (think of the Vampires). It should be Cecil Nobbs, really, but there are historical exceptions for major characters called "Nobby", "Granny", etc. --Old Dickens 00:13, 1 December 2009 (UTC)

Point taken. Actually, I just thought of something. There's a woman in the same wing of the home as me that constantly refers to characters by their first names, regardless of their commonly-used name, so she always calls Dibbler 'CMOT' instead of 'Dibbler.' Want me to create a redirect page from Cecil Nobbs to this page in case of people like her? Doctor Whiteface 03:01, 1 December 2009 (UTC)

The Guardian (London, 20/01/10) has an interesting letter: the etymological derivation of the nickname "Nobby" is claimed to be via generations of British soldiers serving in India, where the nobi of an Army unit was the platoon or company clerk, that rare soldier who could read and write and assist the officers in doing the practical admin tasks - "nobi" being Hindu for "scribe" or "writer" or "clerk".

I'm not sure how it fits here as Nobby Nobbs is only just functionally literate and tries to avoid excess paperwork, and while he served in the Army, the nations of the Sto Plains do not have the same sort of historical association with any sort of "India" on the Discworld that the British did. (Yet other Indian-derived slang words have filtered back into Morporkian - we're told via Klatch?) Worth noting, anyway. --AgProv 12:32, 20 January 2010 (UTC)

Anyone of a certain age with the surname Clark or derivations of it (Clarke, etc) in Britain was/is a Nobby. The idea has merit, but how it fits in... We know our Nobby was a quartermaster, but the scribe - no, no. If your surname is Nobbs, I guess Nobby is the most likely name you'll get. Can't be worse than Cyril, anyway... --Knmatt 15:31, 20 January 2010 (UTC)

I like this proposition better than the Wikipedia explanations, but I have had no luck finding any nobis who aren't Korean or Japanese; a Hindi-speaking co-worker doesn't recognise the word. There is, however, Nabu, "the scribe and herald of the gods, god of writing and destiny; patron of scribes". He should be close to AgProv's heart, coming as he does from the Cloak of the Illuminati: Secrets, Transformations, Crossing the Stargate By William Henry. . . --Old Dickens 01:56, 1 February 2010 (UTC)
Also, Nobby was wearing a "Knobby" top hat when first encountered at age ten. There are an amazing number of uses of Knobby/Nobby in English slang around the world. --Old Dickens 16:28, 19 June 2011 (CEST)

Nobby must have had something to do about this website:http://www.popthatzit.com/

I was watching episode 3 of the 7th series of "They Think It's All Over", a sports-themed British game show, and "Nobby Nobbs" was one of the answers. Does anyone know anything about this? 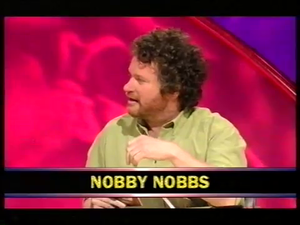 Ah. I may be able to answer this with some confidence. We are, I think, referring to 1960's football legend Nobby Stiles, a mainstay of Manchester United's star side who won the League and European Cup, and who turned out with England's World Cup winning team of 1966. In appearance a remarkably "differently handsome" sort of man of no great physical height, Nobby was feared as a tough player in defence and after having lost most of his teeth, deliberately played his games without dentures so as to be able to scare the Hell out of the other side, merely by smiling at them.

[Wikipedia| https://en.wikipedia.org/wiki/Nobby_Stiles] says: He was an unlikely-looking footballer in many ways – he was short, at a time when teenagers were being rejected by clubs purely because of their lack of height; he was also a wearer of dentures, the removal of which prior to matches gave him a gap-toothed expression which had the potential to scare. He became significantly bald at a young age and sported a dramatic comb-over; and he suffered from severe shortsightedness, meaning he needed strong contact lenses when playing and wore thick spectacles off the field. 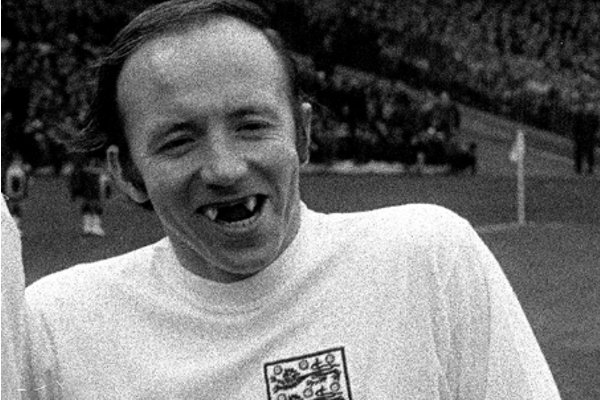 Photos of him are interesting. The nickname "Nobby" may have been a case of life anticipating art. Also recall the other Foot-The-Balling referent - Alphonse Nobbs (no relation) , Bledlow. AgProv (talk) 12:32, 29 May 2017 (UTC)