Now, the Tump appears on the The Discworld Mapp in 1993 (several years before mention of the clacks, let alone the Grand Trunk's tower) but the Trump Tower was finished in 1983. Was The Author lining that joke up for that long, or was it serendipity? --Old Dickens 20:55, 25 June 2008 (UTC)

A front plan view of the Tump Tower, entirely speculative: 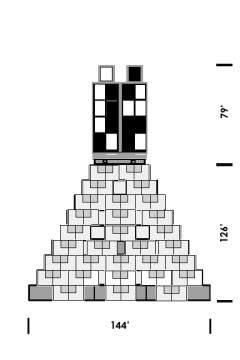 The base is 144 feet square and each level decreases by 12 feet in width, making the ninth floor 48 feet wide. Each storey is 14 feet in total making the 9-storey building 126 feet tall. Almost the entire area of the ground floor is excavated to create an underground delivery area, stable and coach-park with some maintenance and storage rooms.

On top of the ninth storey there is the mechanism and operators' enclosure supporting duplex clacks arrays in three directions: toward the city center, Sto Helit, and Quirm. A shutter is about 10 ft./ 3 m. square. They appear narrowed by perspective since the city array faces somewhat to the left of the front of the building.

The ground floor is a large lobby dotted with kiosks and ringed by shops and services such as the Grand Trunk’s message centers, translation and banking services and sellers of over-priced luggage, jewellery and confectionery. The floors above house the offices of the Grand Trunk and various financial and trading firms as well as the usual grifters and fly-by-night operations who want a prestigious address just long enough to collect some money. As the floors get smaller the rooms become larger and more luxurious so that very few people occupy floors 7a and 9 while 2 to 5 are densely packed with middle and lower-middle-class clerks of all kinds.

There is a marvellously efficient elevator system. Originally, Golem power was anticipated but the Artificers produced a device which stores the energy accepted in braking the falling cages and uses it to lift them again. Only modest additional input is required which can be supplied by horse or even manual power.
--Old Dickens 17:02, 1 July 2011 (CEST)