The Clacks is the informal nickname for the semaphore system that is the fastest means of non-magical communication on the Discworld. It was first seen in The Fifth Elephant, and featured heavily in Going Postal. The system was invented by Robert Dearheart, and later run by the Grand Trunk Semaphore Company. 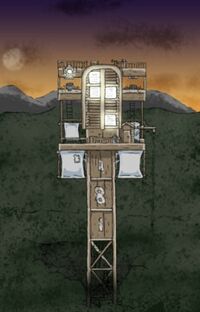 The machinery consists of a series of towers, each of which contains a grid of eight shutters, double for particularly busy towers. By opening and closing these shutters, very complex messages can be coded and sent long distances - it is even possible to send colour pictures.

The towers are approximately 150 feet tall and eight miles apart. In dangerous areas of Überwald and other places, the bottom of each one is a twenty-foot-high stone building with reinforced windows and doors, providing security and accommodation for the operators.

The original machinery has been improved upon by the use of clockwork and punch cards known as jacquards. John Dearheart, son of founder Robert, kept tweaking the design of the tower he worked in, making a tower that was easier to construct, improving wind resistance and the shutter systems, harnessing wind power and adding coloured lights. These enhancements may or may not have been passed on to the rest of the Grand Trunk, however by the time of Raising Steam 'new augmented colour shutter boxes' were in use after dark. In Making Money, Moist von Lipwig mentions treadmills powered by donkeys, and suggests that they be replaced with Golems.

The Grand Trunk was the name for the main system of towers that ran from Ankh-Morpork to Genua, via Überwald and Borogravia. The towers in the wilder parts of the continent were typically fortified. Ankh-Morpork would go to war against any country who threatened the traffic on the Grand Trunk, which it did in Monstrous Regiment. More accurately (as Ankh-Morpork has not had an army in living memory), they went to the war and explained to the combatants that it would be very bad for their commerce and industry to threaten the Clacks.

Unfortunately, the pioneers who invented it were not as good at running a business as they were at engineering, and were bought out using embezzled money. The Grand Trunk came under the control of the corrupt Reacher Gilt. The new company eliminated the daily maintenance time (the Hour of the Dead), resulting in the Clacks often being down for longer periods for the inevitable major repairs.

By the end of Going Postal, Lord Vetinari had intervened following exposure of the Company's crimes. As of Raising Steam, Adora Belle Dearheart is now Managing Director and CEO of the Company, possibly a factor enabling her and Moist to start married life as residents of Scoone Avenue. Adora proves to be a very hands-on CEO.

Several companies and organisations in Ankh-Morpork have their own towers and "c-mail" addresses, including the Ankh-Morpork City Watch, We-R-Igors and Unseen University. The latter's semaphore tower is linked up to Hex, effectively creating the Discworld's first modem. Companies typically use their own codes in addition to the Grand Trunk's own.

The shutter machinery is generally operated by humans, including children, something that the GTCS were willing to overlook due to the kids not drawing wages. Sometimes Gargoyles are hired as clacks monitors in the city, because of their ability to sit patiently on rooftops. Clacks operators typically tend to be single-minded to the point of obsession. Sometimes it all gets too much for them (particularly if they spend too long in the sun), and a condition like 'calenture' sets in - measures were put in place to reduce the number of workers who suddenly thought they could fly.

Just recently, large numbers of Goblins have been taken on as clacks operators. They have an amazing talent for reading and coding despite having no tradition of written language, and their small size is handy in the cramped towers and among the machinery. Their presence has assisted the clacks in becoming 'more accurate and streamlined than ever before', being able to identify subtle shade differences in the colour shutter boxes now in use far more accurately than humans. Goblins show great enthusiasm for this work, enjoying the coding and deciphering, working day and night where possible, stopping only when sleep becomes a necessity (and even then sleeping in the clacks towers) or when the lady troll with the rat trolley brings around food. Late at night Goblins chat with other Goblins via the clacks.

As with our world's Internet, the new system has brought new types of crime with it. Hacking (i.e. breaking into a semaphore tower) arose fairly quickly, but this form of computer crime was dealt with by the simple expedient of arming the tower operators.1 The Smoking Gnu discovered that certain codes could disrupt and damage the delicate machinery, something they often did in protest of the policies of the Grand Trunk Semaphore Company. This kind of attack is known as "cracking". The wizards have also used Hex in this kind of crime, as it was easily able to crack the codes to make a message appear to have been sent by a guild or even the company's internal network itself.

1 In the events of Raising Steam, we find the Delvers of the reactionary Grags attacking and burning the towers again, attempting to prevent advancing modernity and enlightenment.

During the events of Monstrous Regiment, Borogravia's Tenth Foot regiment chance across some Zlobenian troops using a light semaphore. Lt. Blouse calls it a "light clacks", although it's a simpler device more closely related to the Aldis lamp or heliograph. A mobile device designed for communicating silently over distance, it consists of a five-foot-long tube to be balanced on the shoulder, with a stovepiped box on the back (perhaps containing a Salamander; Blouse suggests a "firework thingy"). There was also a brief fad for portable semaphore sets, but these have not appeared since their mention in the Thieves' Guild Yearbook. The Watch has experimented with semaphore helmets, with limited success, and once used white paddles to send a message to the Watch House.

The real-world counterpart of the Clacks was known as the optical telegraph or Semaphore Line. Invented in the late 18th century and operated into the early 19th century before being made obsolete by electrical telegraphy, semaphore lines were used by the governments of France, Britain, and other European countries to convey vital information more rapidly than horseback riders could. Semaphore lines could only send about two words a minute and were thus much less efficient than those of Discworld. They also were not available to the general public, being used only for military and government use.

The Count of Monte Cristo by Alexandre Dumas père contains a fictional account of a successful exercise to subvert the operation of one such semaphore tower. This scene almost certainly had some input into the Discworld events along similar lines.

In 2015 a board game based on the fictional clacks system Clacks A Discworld Board Game was developed by Backspindle games and Z-Man games.

The Internet Engineering Task Force has published RFC 4824, a method for The Transmission of IP Datagrams over the Semaphore Flag Signaling System (SFSS), in 2007.