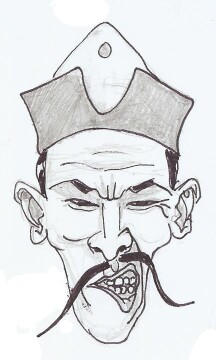 One of the five noble families in the Agatean Empire who periodically succeed in getting a member enthroned as Emperor.

Lord Tang is somewhat transparent and depressingly dim, allowing himself to be manipulated and set up as a fall-guy by Lord Hong. The other lords are relieved by this, as when the Emperor is looking for somebody to blame, as he soon will do, his eye is sure to alight on Tang first, thus saving their persons from that unspecified thing they do with a wire waistcoat and a cheesegrater.

The others are the Sungs, Fangs, Hongs and the McSweeneys.

George McDonald Fraser provides a very specified account which will remove all doubt as to what the wire waistcoat and the cheesegrater are for, in the novel Flashman and the Dragon. In which the adult bully and poltroon from Tom Brown's Schooldays narrowly evades such a fate himself, at the hands of an insane Chinese mandarin...

Tang was also the name of the Chinese Imperial Dynasty that proceeded the Sung. This is probably not happenstance.