Though it is called an empire, it is not a very large kingdom, in Klatch, or by an alternative interpretation, in Howondaland. The Tezuman people are depressingly meticulous, and meticulously depressed. They have prophecies written in pictograms on their great pyramids, prophecies including, for example, the arrival of the ruler of the world. The Tezuman have a very thorough calendar system, which they use to measure how the world steadily becomes worse. The Tezuman are still in or near stone age, using stone carts, stone disc with a hole in it as hats, slabs for writing, etc. The Tezuman are unique in the fact that amongst the many cultures to have discovered the wheel, they are possibly the only one to have found multiple uses for it, other than the obvious one everyone else uses.

Tezuman presumably comes from Montezuma, the ninth tlatoani or ruler of Tenochtitlan, reigning from 1502 to 1520. It was during Montezuma's reign that the Spanish conquest of the Aztec Empire began, and his name is synonymous with all that we know of the Aztecs, who (along with aspects of the Incas and Olmecs) were the inspiration behind the Tezuman we meet in Eric.

Tezuman Chariots are drawn by llamas and have two runners holding up each side of the axle. An illustration of a Tezuman chariot and the alternative uses of the wheel appears in the Howondaland section of the The Compleat Discworld Atlas. it would appear that geographically, Tezuma is considered an integral part of Howondaland. The nation imports lost explorers and sacrificial victims and exports chocolate, jade, infectious diseases and intestinal parasites. 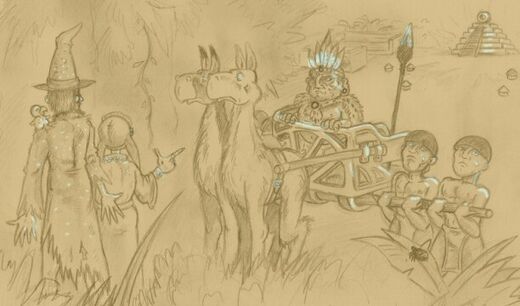