"The Tooth Fairy", when applied to the person who collects the teeth of Discworld children, is something of a misnomer. Unlike Death, who appears for everyone, the Tooth Fairy is more like a franchise. Therefore it should not be "The" Tooth Fairy, but "a" tooth fairy, and they aren't actually fairies either. While at work they function as Supernatural Entities, being invisible to adult people.

The money to operate the franchise seems to come from deeds, e.g. for Thimble's Pipe and Tobacco Shop.

The original Tooth Fairy (who deserves the capital letters) was a bogeyman. Not many details are known about the common workers. In Hogfather we see the driver of the collection cart Ernie, Violet as a tooth fairy and Charlie, an overseer. All tooth fairies carry a pair of pliers, in case they don't have the right change and have to remove an extra tooth; this caused problems for one tooth fairy when a child slept with his head under the pillow.

The Tooth Fairy himself was "The" Bogeyman who collected the children's teeth in order to protect them from the old mind-control magic. He was replaced by Banjo Lilywhite, Bilious and Violet.

There was, very briefly, a Troll tooth fairy called Clinkerbelle, but he was arrested by Detritus, who didn't believe his story. The flimsy gauze wings crudely glued to his back were no help in proving he had a right to knock out (diamond) troll teeth in exchange for small coins. This must have been quite a profitable scam prior to Clinkerbelle's arrest. 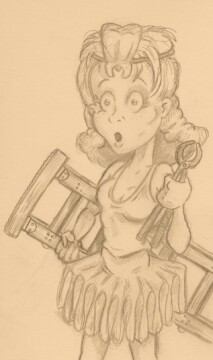 Violet with the tools of the trade.by Kit Cox
Retrieved from "https://wiki.lspace.org/index.php?title=Tooth_Fairy&oldid=27939"
Categories: