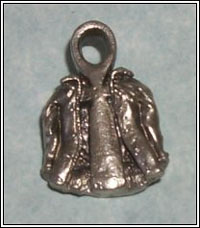 The "anorankh" earrings that immortalised Colette Reap in the Discworld novels.

Tuckerization is the accepted name for the process, not only in Discworld novels, by which people buy a chance to be written into novels as (usually) minor characters, often in return for a suitable donation to charity. It is derived from science fiction writer Wilson Tucker, who either originated or popularised the idea.

Sometimes this involves no money changing hands – Hodgesaargh, the Lancre castle falconer is based on Dave Hodges, the man Terry used for research on falconry, and the seamstress Colette who appears in Maskerade is a tribute to a fan who appealed to Terry because of her infeasibly large and different earrings. "Fascinatin'", you might say. Gytha (Nanny) Ogg was based on an acquaintance of Terry's whose involvement in the filk scene was probably the inspiration for Nanny Ogg's penchant for singing.

Beneficiaries in the Discworld canon include:

Another notable Tuckerization happens in The Long War, where real-life animal experts and owners of a large feral cat sanctuary, Doctor Christopher Pagel and his wife Julia Pagel, are written into the story as themselves - but given the management problems associated with large cat species not known on Datum Earth. A note at the end of the novel acknowledges them and their work in large cat preservation (owners of the Companion Animal Hospital in real-life Madison)