Sorry if I'm not really meant to do a Bio - don't know what else to put for the time being and despite searching can't find any guidelines.

The mind, heart and soul wanders other worlds, but the physical form is based in Wales.

Member of the Discworld MUD - user: VerityWolf (don't play it as much as I'd like to sadly)

First Pratchett book I read was THUD! - A friend of my mum had recommended it and while my mum didn't get it (she doesn't really get that sort of humor based on metaphors etc) I loved it and have been hooked ever since.

Huge fan of Doctor Who and Sherlock Holmes, though I have a sneaking suspicion the Discworld is becoming a permanent fixture in my mind, more so even than the two universes mentioned above. When my mind wanders, it wanders the streets of Ankh-Morpork, the Ramtop mountains and the slopes of Cori Celesti, rather than through time and space or the streets of Victorian London as it so often has. I justify this mentally in someways by recognising the Disc is a world and mirror of worlds - and so both my other fandoms will have their parallels on the Disc somewhere. Also a fan of Lord of the Rings, Harry Potter, The Farseer Trilogy, The Chronicles of Ancient Darkness and His Dark Materials - but none have touched my heart and taken over my mind to the extent of the Whoniverse, Holmsiverse or Discworld.

Currently Self-employed medical herbalist. Have a long standing interest in 'alternative' (but lets face it - truly traditional) medicine and 'energy' work. Consequently I find the activities of the Witches fascinating and often all to close to the truth.

Hobbies (other than dreaming and reading) include Medieval Re-enactment (which includes Archery, Quarterstaff and one day Sword fighting, Fingerloop braiding), Lord of the Rings Online and Music (the violin - but not at all good at it due to muscle pains it causes - , plucked psaltery and tabor pipe and drum).

Currently writing up the adventures on the Disc that I dream about. Got about 4 main stories on the go, 3ish on the edge of my mind and 2 short story all in the same (new) thread. With just their bare bones (the central story lines that are even then yet to be fleshed out) the first and second ones word counts are over 14,000 words already! Now if only I could harness that writing magic and use it to get so real work done for my degree. Working hard not to make them Mary-Sueish, but it's hard when you place a sort of mirror of yourself on another world and see it through their eyes and feel it with their heart. At present I'm writing to record them and get them to move beyond simply my mind. Perhaps one day, I may improve and publish them online if I ever feel they may have some worth to others and can get over my lack of confidence.

I'm also learning to draw - though I'm not very good - and will hopefully one day be able to contribute fan art and illustrate the stories I dream up.

I do feel sorry for my family. They've got me A Blink of the Screen and Dodger which I'm absolutely delighted with and are putting up with me wittering on about the Disc - which they don't always 'get'. And a friend has got me Raising Steam (which my parents had said not to get on the basis it would distract me from my studies) and The Complete Ankh-Morpork - which I am absolutely engrossed in. Consequently my mind is back on the Disc, rather than in much needed revision.

A thought on the Year of the Reciprocating Llama

Recently my mind has been on stamps (of the Discworld variety, naturally) thanks to the Discworld Emporium bringing out some special limited edition ones to celebrate 10 years since they started making them and 10 years since Going Postal. On a side note I'm rather delighted to have found myself the owner of a smiling penny patrician as well as a pure black Vetinari Four pence, even if I didn't get one of the Blue triangles, an autographed card, autographed first day cover or the solid gold penny patrician - how a couple of sports can make up for the realization I missed all that I haven't a clue, but it does.

Something occurred to me, when studying the sheet of Vetinari Four Penny's I bought that along the bottom of it is the line: "Honouring Our Esteemed Tyrant - Lord Havelock Vetinari - Year of the Reciprocating Llama".

For some reason it was playing on my mind over the last couple of days.

Then a particle of inspiration, or perhaps understanding, hit me.

The Year of the Reciprocating Llama is 2014.

Vetinari is still the Patrician as of that date! (Talk about survivability - I wonder if he's set a record for the longest lasting Patrician yet).

We may not have the stories up to the present day yet, and the characters may be getting on a bit in years (By my calculations Havelock would be 74/75, Sam 73/74, Moist 50/51, Ridcully 98/99, Granny Weatherwax 88/89, Susan 44/45, Carrot 45/46 and Young Sam would be 24/25) even if they're not really showing it (if the Penny Patricians and Penny Moists are anything to go by - time seems to have gone a bit wibbly-wobbly) but there seems some continuity, some stretching of the Time Line beyond the books to the present day! Unless of course there is some strange parallel-shift that means 2014 (and the year of the reciprocating llama) on Roundworld is equivalent to the year 2000/1 (10 years after Going Postal took place) on Discworld. That still adds a few years on top of our already established timeline (with Vetinari in his 60s, Moist in his mid-30s etc).

Mind aching a little at playing around with numbers and dates, but feeling a little happy hope that the former conclusion is accurate.

Oh, and another thought! Unseen Academicals takes place in the Year of the Pensive Hare - according to the Discworld Stamps website that correlates to 2009. That date seems a little far ahead, and leaves quite a long gap after main confirmed event dates (e.g. Thud etc in 1990/1 and Snuff in 1995/6?) and mix up the order a bit, but applying the same logic that the names applied on roundworld are a good few years behind and using the assumption 2000/1 = 10 yrs after Going Postal, that could place it around 1995/6 - the same year as Snuff?

Divination After Dark - 2014.10.31 - Mistress Weatherwax during one dark and stormy Soul's Cake night recalls a scene from her youth.

As a rule, I wouldn't publish my fanart here - at most I'd provide links - as I know this is a wiki page and I don't want to swamp it with what belongs on a personal blog or website. But then, some rules are meant to be broken, or at least bent, and this is hardly normal circumstances. My own little tribute, drawn the night of the 12th after hearing the news, though only published on the 16th when I finally got home to an Internet connection. 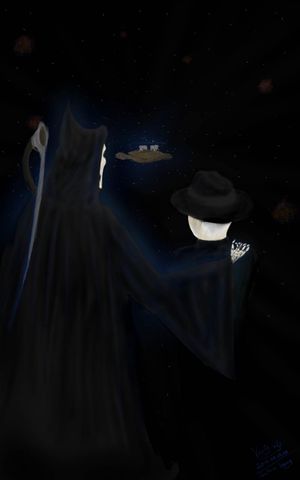 Today (2015.08.20) My 2016 Witches Diary arrived. There's quite a few dates in there for events not mentioned on the main page for festivals etc. - so I'll hopefully go through it and add some in the near future.

On a slightly different tangent I've started working on a google calendar with the dates: something importable for many calendar programs as well as viewable online. According to google one should be able to:

It's still quite rough, but here's the links:

I don't know what all the dates are - some might not even be Discworld but were listed in the diary and didn't ring any bells as roundworld dates, and theres duplicates of some. As I said, it's still quite rough, but something that hopefully might be of interest to others: I find I can have it on my tablet calendar which helps keep me up to date - literally.