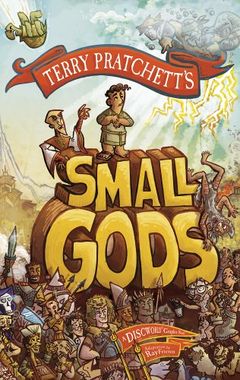 Small Gods was adapted and illustrated by Ray Friesen (2016).

The plot of this comic is the same as Small Gods, however some parts have been reduced in order to create a shorter story that's easier for the different format.

Differences between the book and comic

There are several differences between the book and the comic,as it has been shortened but also:

References to other works

Since there is a gap of 24 years between the publication of the book and the comic, there are some references to Discworld books written in the intervening period: