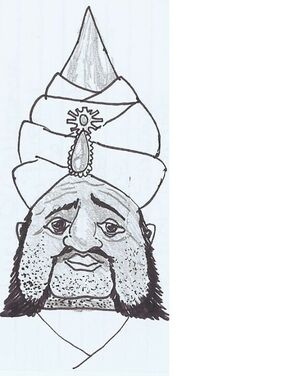 Creosote, as drawn by Matt Smith

A man alleged to have the Midas touch, which might make going to the toilet somewhat problematical.

The rumour about everything he touches turning to gold might be a garbled folk-memory of a curse placed on one of his predecessors by an unfortunately dyslexic deity. This previous Seriph, at least until the curse was lifted, was forced to endure a state where everything he touched turned to Glod. Glod being a terminally bad-tempered dwarf from somewhere near the Hub, made more so by being magically transplanted to a desert city on the Circle Sea and ruthlessly duplicated an unspecified number of times. It is said that to this day, the population of one city is notable for being largely extremely bad tempered and short.

While Creosote lacks the power to turn all he touches to gold, it is the case that up until the advent of the Sourcerer, he was fabulously rich and attempted to spend his wealth on creating a Pleasure-dome, as per poetic instructions and according to the laws of the Narrative Universe.

Unfortunately for him, he suffers from a sort of poetic dyslexia where he can see the shapes of poems which elsewhere in the known Multiverse have seared the soul, fired the imagination, and resonated down the ages.

He just cannot get the vocabulary right - it has been noted that he has the poetic sensitivity of a hyena - and thus all the resonances with worlds that have had more favoured and talented poets (see Annotation) are just a complete waste of inspiration particles here.

His domain is effectively ruled by the Grand Vizier, Abrim, to whom the Archchancellor's Hat effectively steers Rincewind and Conina.

In the ensuing mayhem, as the Hat sets about using Abrim as a worthy tool to fight the Sourcerer, Creosote's assets diminish somewhat as the people take advantage of the chaos to loot the palace.

On a hastily acquired magic carpet, the three, plus Nijel the Destroyer, flee Klatch and eventually end up in Ankh-Morpork for the final showdown.

Even though we are assured that the Sourcerer, as his last act before entering Maligree's Wonderful Garden and closing the door behind him, restores everything on the Disc to just the way it was before all the trouble, we last see Creosote in Ankh, where he discovers his over-literal and pedestrian poetry is actually appreciated, using his best lines to charm barmaids into giving him free drink.

The Chronicles are silent as to whether he was restored as Seriph, although we can discern this is just a figurehead position with no actual executive power. If he were still Seriph at the time of Jingo, it is therefore no surprise that he is not mentioned or seen, as the focus is on Klatchian potentates such as Prince Cadram and Prince Khufurah.

The two Roundworld poets whose work is freely adapted by Creosote are Samuel Taylor Coleridge (Kubla Khan) and Omar Khayyam (The Rubaiyat).

On the dangers inherent in taking things literally, comedians Peter Cooke and Dudley Moore once performed a sketch where they took the role of builders who have accepted Kublai Khan's decree that a Pleasure Dome shall be built in Xanadu. (As per the Coleridge poem). Cooke and Moore go through the poem line by line, writing an estimate in terms of materials, labour costs and making good, punctuated by the classic tradesman's reversed-whistle-through-the-teeth and interjections of "Cor blimey! That's going to cost!" and "He wants all this doing by Thursday week?" and "if this bleedin' river he wants digging is "measureless to man" that's no bleedin' help in writin' an estimate, is it? Bit vague, ain't it? Can't cost out what it's going to cost in JCB hire for excavating the bleeding thing if it's "measureless to man", can you? Take that down to Murphy at the plant hire firm and he'd laugh in your face. Measureless to man. I ask you. "