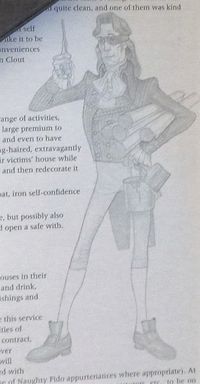 Lawrence "Leeky" Llwyddianus-Bonheddwr is the principal lecturer in Breaking and Decoratring at the Thieves Guild School. In appearance a long-haired and extravagantly dressed somewhat foppish man presenting a deceptive aura of effeminacy, he practices this example of Anticrime under the auspices of the Guild. The crime involved, which the Guild can facilitate as a special surprise to a person to whom you wish to show the appropriate degree of thoughtful esteem, involves breaking into their house while they are away, and then redecorating it in a truly tasteless and appalling style using cheap and nasty materials.

the way Lawrence "Leeky" Llwyddianus-Bonheddwr is drawn by Paul Kidby for the Thieves' Guild Yearbook instantly evokes British TV presenter and "homestyle consultant" Lawrence Llewellyn-Bowen, a man who is a suspiciously close match for the description and the drawing. The foppish and effete Lawrence - incidentally a married man with four children, he just acted Straight Gay - presented a makeover show on British TV for some years called Rooms. This was predicated on "friends" of a victim family, inviting Lawrence and the team to go in while the victims were on holiday and to completely redecorate the place. His partner in crime was a loud Scottish woman with too many teeth called Carol Smillie (others fitting the description of over-confident harridan with teeth and a very loud voice were Linda Barker and Anna Ryder-Richardson) and both remained utterly convinced the subjects would love their work. Until the moment they saw the horror, and in one extreme case burst into tears...