Where's My Cow? is a picture book for children, based on the fictional book of the same name. It tells the story of the evening when Samuel Vimes goes off-script while reading Where's My Cow? to his son, as briefly mentioned in Thud!.

This is a book about reading a book, which turns into a different book. But it all ends happily!

Every day at 6:00pm sharp Sam Vimes reads the book Where's My Cow? to Young Sam. But one day Vimes decides that it makes no sense to read about animals which Young Sam will never see alive. Therefore, he changes the story of the book a little to be more interesting for someone living in Ankh-Morpork.

A spin-off from Thud!, this is a book ostensibly aimed at very young children.

On the outside, it is a facsimile of the fictional book mentioned in the novels Thud! and Wintersmith, though it lists the author (who is unnamed in its fictional appearances) as Terry Pratchett. It shows Commander Vimes in a totally different light than the Watch Books - he's happy, for one thing! - and features illustrations from the fictional book, illustrations of Vimes at home reading to Young Sam, and illustrations of the story he tells Young Sam instead of sticking to the book. Terry Pratchett's text and the artwork of Melvin Grant combine to present a different sort of Discworld, with many of the familiar characters re-imagined through Grant's lovely artwork.

It doesn't include more than a few pages of the original book mentioned in the novels, so we never find out where, how or if the unnamed protagonist finds their cow. (Pratchett addressed this directly after receiving a letter from a concerned reader.) It does, however, feature a conclusion to Sam's improvised version which is missing from Thud!.

Yes, it even sustains these:

Where's my daddy?
Is that my daddy?
It goes "I fink, derefore I am. I fink".
It is Sergeant Detritus the troll!

On the Moody Blues' 1969 LP On The Threshold of a Dream, the very first spoken words are those of flute player and singer Ray Thomas, who is going through a similar sort of existential angst:

And both, of course, are riffs on René Descartes' pithy aphorism concerning the primacy of thought and personal identity. (But what else would a troll resonate to apart from rock music...)

Also, it has been pointed out that the book can be sung, almost word for word, to the tune of the Queen hit, Don't Stop Me now. This is oddly appropriate, given that the book is a journey and on a journey, all music eventually mutates into a "best of Queen" compilation. For a take on this, see here[1]'. 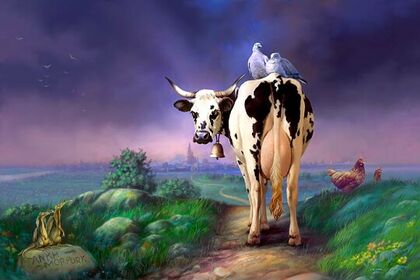 Drawn in the style of a children's picture book, this is an opportunity to use an illustrator other than the great Kidby, and to explore familiar Discworld characters in a different style.

Melvyn Grant takes over the artwork for this book, and his conception of Sam Vimes appears to be very much in keeping with Terry Pratchett's stated perception of the character as "looking like a young Pete Postlethwaite".