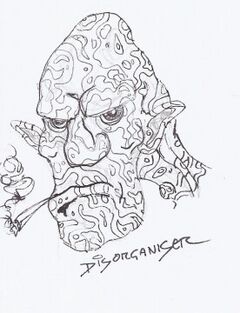 Most Dis-organisers are the product of the Thaumatological Park, a business enterprise set up under the auspices of Unseen University. Utilising what was formerly known as the Unreal Estate, this is now a thriving go-ahead hub of magical business, where the commercial by-products of research magic are made available to the general public. The name of Ponder Stibbons may not be far away from this development, which might explain the extreme honesty of its name.

There's also a second layer of meaning to Dis-organiser. Not only is it simply the opposite of something that is supposed to help organise your schedule, but Dis is the the name of a city encompassing the sixth through ninth levels of hell in Dante's The Divine Comedy, inspired by a Roman god of the underworld Dis Pater. And imps come from hell. Hence Dis-organiser, a hellish organiser that causes immense frustration to its owner.