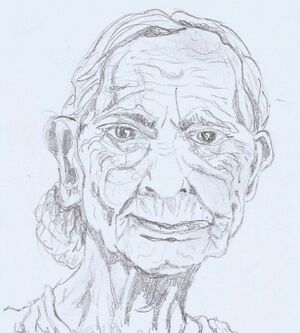 Old Mother Dismass is an old witch who is highly gifted with second sight. However, the constant switching of her mind between past, present and future caused her to lose her anchorage to the real world. Therefore, she spends a lot of time in the past and the future, but very little time at the here and now. Trying to talk to her can be quite unnerving. "If you spoke to her in August she was probably still listening to you in March. It was best just to say something now and hope she'd pick it up next time her mind was passing through." It was when Granny Weatherwax, watching over the old witch, was asked to play Cripple Mister Onion that she obtained mastery of the game. It seems Old Mother Dismass was sufficiently anchored in the here and now at this point that she could predict an opponent's moves in the game. Old Mother Dismass appears in Witches Abroad and is mentioned in Wintersmith as a previous teacher/mentor of Tiffany Aching.

Intriguingly, there is a Dismass Row in Ankh-Morpork, leading off the Dark Gate and Long Wall. (square B5 on the The Compleat Ankh-Morporkmap).

Getting around the inconvenience of blindness by retraining your psychic senses to see into the present is something of a witch speciality on the Discworld.

Interestingly, somebody who may have read the Russian translations of Pratchett and thought "Hmm, there's a good idea" is a Russian charlatan called Vladimir Bronnikov. His particular form of pseudo-medical quackery involves hard-sell persuasion to blind people that they can learn to see again by training and enhancing their inner psychic vision to "see into the present", thus bypassing all that tedious bio-optic neurological stuff involving the interplay of eye, optic nerve and visual cortex of the brain. His promotional videos involve exciting things like blind people playing snooker, watching TV, and - hair-raising in its implications - driving cars. Bronnikov will bring you his life-enhancing gift to the world for modest sums, to reimburse his necessary expenses, naturally - beginning at €700 (£550) for the basic taster course, going up to €6000 (£4500) for the advanced course. Exposed by professional stage magician and mentalist David Blaine (a sort of British James Randi) as either a fraud or a self-deluded hysteric.