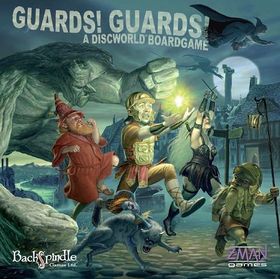 Guards! Guards! was developed by Backspindle games and Z-Man games in 2011. The artwork for the game was created by Stephen Player. The two studios later collaborated for another Discworld game Clacks.

Players are tasked to collect and return five of the missing Great Spells to the Unseen University. Each player selects one of four Guilds to infiltrate, Thieves, Assassins, Alchemists or Fools. Their chosen Guild card will give them a specific selection of the Great Spells to collect and grants them a unique Guild Ability which can be used to hinder their opponents. It is also used to mark the players’ Charm, Guild and Magic abilities, which can be developed throughout the game.Time is short, so rather than returning each Spell in person, the players have been granted the power to recruit the good, and not so good, inhabitants of the city to act as guards and runners to protect and return the Spells to the University. There are fourteen locations on the board where players may Charm (or Bribe) Volunteers to join them on their quest.