According to his card, he's 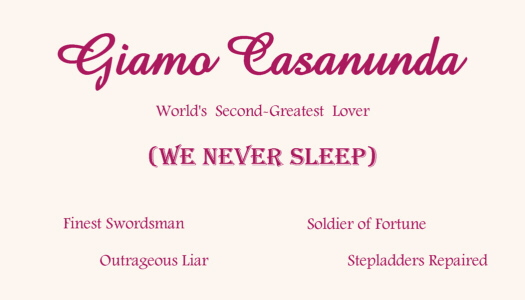 ...and he's three-feet-nine in his high-heeled boots. He is the most unusual Dwarf on the Discworld, including Carrot Ironfoundersson (who's deep-down-conservative by comparison, and he's human), Hwel, Glod Glodsson and Cheery Littlebottom and her repressed ilk. Casanunda rejects the work ethic, the reserve, the conformity of the Dwarfs and dons a character built on Dick Turpin, Pépé Le Pew and Casanova (although given the Pépé Le Pew reference, there may be a hint that like Glod Glodsson, he is casual about sweating a lot, to the point where he may be forced to change his vest? Don't forget the original Casanova lived in a time of minimal hygiene). He has immense confidence in his abilities as a highwayman and all kinds of swordsman, and sometimes it's even rewarded (the Queen of Skund made him a Count; just ask him). Count Casanunda walks tall, dreams big and rides a big horse... with the aid of his trusty stepladder. First mentioned in a footnote in Reaper Man (as one of "the Discworld's great lovers," but spelled "Casanunder"), he appears in Witches Abroad, Lords and Ladies and Carpe Jugulum, usually playing against Nanny Ogg. He even tried to seduce Nanny with such haute cuisine as could be found at the Goat and Bush. This is pretty much like throwing rocks at a tank, but as he says, he may be only the second-greatest, but he tries harder.

"Casanunda" is a dwarvish take on "Casanova" who was so famous as a womanizer that his name remains synonymous with the art of seduction and he is sometimes called "the world's greatest lover". He associated with European royalty, popes and cardinals, along with men such as Voltaire, Goethe and Mozart; but if he had not been obliged to spend some years as a librarian in the household of Count Waldstein of Bohemia (where he relieved his boredom by writing the story of his life), it is possible that he would be forgotten today.

In those writings he mentions over 120 adventures with women and girls, with several veiled references to male lovers as well. He describes his duels and conflicts with scoundrels and officials, his entrapments and his escapes, his schemes and plots, his anguish and his sighs of pleasure. He demonstrates convincingly, "I can say vixi (‘I have lived’)."

Shedding more light on one of those Well-Known Facts.

Without being erm, indelicate, it is appropriate to note here that there has always been a sub-genre within pornography featuring "people of restricted growth". This is an area that features dwarf men far more than women, as the physical condition which creates dwarf stature tends to act on the limbs, whilst leaving the genitalia as they would be on a normally proportioned human being. Therefore dwarf men appear, by this hopefully compensating quirk of Nature, to be abnormally well endowed, even over-proportioned for their size: it's a sort of optical illusion which has been frequently exploited by the adult film/magazine industry.

Robert Anton Wilson has a character called Markoff Chaney, a.k.a. the Midget, who is Casanunda's spiritual cousin in the Illuminatus! universe.