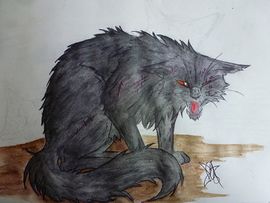 Courtesy of kiddosnightmare, whose work can be viewed on deviantart

Greebo is Nanny Ogg's tomcat, he is feared in the forests of Lancre by all animals, and he is the father of most of the cat population in the area.

Flea bitten, with scars all over his face and his partially present ears he is a huge swaggering bully of a cat - renowned for once chasing a bear up a tree. He has a green left eye and a milky white right one. He is intelligent for a cat, but uses three categories to define the things he sees as "rape, fight or eat." This is the cat that Nanny Ogg refers to as "Mr. Puss-puss," and sees, in her head, as a cute little bundle of fluff - yet everyone else calls "gerroffyerbugger!!!"

In Witches Abroad he was magically transformed into a human. Well, he was magically transformed into a cat who believes he's a human, which, being a cat, was a rather interesting experience for him. As a human, he loses none of his agility, his claws, his appetite, his teeth, or his lust for all things female. And his eyes stay the same; there's practically no magic that can do anything about the eyes. He's pretty mono-syllabic, but understands humans.

Despite the scars and the bad eye, the human Greebo's other eye glitters like the sins of angels, and his lazy smile is the downfall of saints. Female saints, anyway. He appears as a dastardly buccaneer ready to unbuckle any amount of swash; a six-foot, well muscled, grinning bully who radiates a greasy aura of raw sexual energy that can be felt several rooms away. Despite everything they see, women are still attracted to him.

Following the conclusion of Witches Abroad, Greebo still changes into human form when in a situation in which being a cat just doesn't cut the mustard. Unfortunately, he changes into a naked human. It is said that if something is done once, it's easier to do it again, and Greebo now becomes human with a worrying frequency.

Before becoming human, Greebo once swallowed a vampire in the form of a bat. Vampires are resilient. They may have managed to rise (repeatedly) from the grave, to survive being sealed in a glass bottle in vapour form (and then thrown into the sea), to be powdered to dust and restored by the merest drop of b-vord... but if this vampire should manage to rise from the cat, the normal action of biology and digestion means this only is the start of its troubles...

Only four things have ever got the better of Greebo:

And, most recently, the pure white kitten You, gifted to Granny Weatherwax by Tiffany Aching, has in the words of Nanny Ogg "fixed his head" to make any future acts of aggression impossible. She did this by means of a hissing scream and a pawful of claws applied to Greebo's sensitive nose, followed by a confident air of Would you like some more of that, then? and a nonchalant assumption of Greebo's food bowl being hers by right of conquest.

There may be another way of reading this. As in The Unadulterated Cat we are assured that an essential part of any cat courtship is the affronted female turning, hissing, spitting and giving the hopeful male a face full of claws, are Greebo and You, in their infrequent meetings, establishing the pattern for later grown-up... er... associations? (A female cat becomes fully sexually mature at between eighteen months and two years, but even then will make it very clear that she does the choosing, OK...?)

...It appears that neither Granny nor Nanny has yet considered this possibility, but Greebo, in his lifelong quest to be the only set of male feline genes in town, quite possibly has a little part of his brain hardwired to checking out future possibilities. Any kittens born of these two parents, further down the line, should have a most interesting pedigree, particularly if by the rather elastic laws of Discworld genetics they inherit Daddy's ability to Turn Human in a tight corner.

In Roundworld, a greebo is variously described as a slovenly, unkempt young man, or an aficionado of unfashionable styles of music such as "heavy metal" or "punk".

In Robert J Sawyer's science-fiction trilogy The Quintaglio Ascension (pub. New English Library, 1993), which is about a world where dinosaurs developed sentience and the dominant life form is an intelligent version of Tyrannosaurus Rex (but which has a problem with periodic regression into berserk territorial fights and feeding frenzies) one of the biggest, toughest, hardest Tyrannosaurs in the pack is called Greeblo. A Pratchett fan?