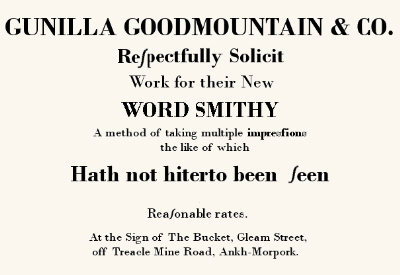 The dwarf who brought moveable type to Ankh-Morpork, Gunilla Goodmountain teams up with William de Worde to start the Discworld's first newspaper, the Ankh-Morpork Times.

Gunilla is the dwarf-to-be of the dwarf Boddony (sex isn't discussed amongst Dwarves – it's rather assumed that the two of them know which is which).

In-keeping with Pratchett's usual mastery of nudges towards human reality, both are well-named. Gunilla is a female Swedish name meaning "battle maiden", while Goodmountain is a direct translation of "Gutenberg". On Roundworld, Johann Gutenberg was the German inventor of moveable type in the 1450s, most famously responsible for the Gutenberg Bible – the first printed books in the Western World to be mass-produced.

"Bodoni" is a well-known typeface that was designed at the end of the eighteenth century by Giambattista Bodoni, an Italian who became the Director of the Press for the Duke of Parma.