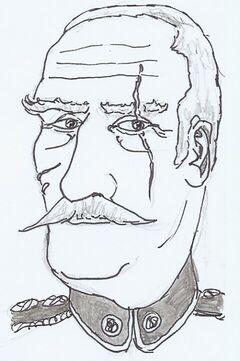 as drawn by Matt Smith

The current Lord Monflathers was one of the nobles of Ankh-Morpork called to hear the rantings of Edward d'Eath during the events of Men at Arms. Like the other nobles he declined to aid Edward's plan to bring back the king, preferring the current situation to the risks of change.

The first Duke (pictured) led six hundred men to a glorious and epic defeat at the Battle of Quirm. As if that were a reason to be proud.

Echoes here of the Roundworld Lords Raglan and Cardigan, who between them were responsible for sending England's six hundred men towards the guns of the Russians in the ill-fated but immortal "Charge of the Light Brigade".

His name is also a combination of two of the bloody battle fields of World War 1; Mons and Flanders. Here generals also had a poor regard for tactics and the lives of their men. Their plans for taking the heavily defended enemy lines normally required their own troops to advance in a line across no-man's land very slowly while under heavy machine-gun fire. The only flaw in this plan was that they all got killed in ten seconds. The generals' response to this 'slight set back' was often to try the same plan again, only with more men "That way some are sure to get through!".