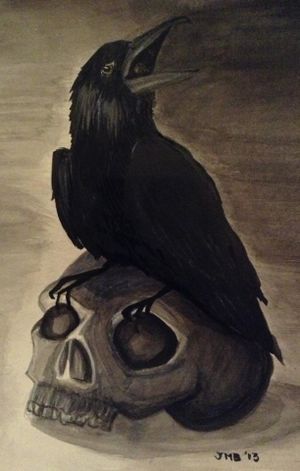 Quoth is a raven who lived at a wizard's in Quirm. He is now the mount of the Death of Rats, but as he says himself: "I'm only in it for the eyeballs." He is named Quoth, as in "Quoth the Raven". The raven himself is not fond of the name imposed on him and refuses to utter "the N-word" (several of the latter stanzas of Edgar Allen Poe's The Raven end in 'Quoth the Raven, "Nevermore."') Quoth has been known to get irritated if circumstances ever lead to a suggestion that he might be forced to say the word

As intelligent as Quoth is, though, he cannot get over an obsession with round shiny things, as he always hopes that they are eyeballs. Items he has pecked at include pickled onions, walnuts, and Hogswatch tree decorations.

Other Ravens on the Disc

Like other ancient towers, the top of the Tower of Art is home to an unkindness of ravens. At Unseen University, they have been somewhat transformed (like certain dogs and rats) by the ambient magic. They make it difficult for Watchgnome Buggy Swires to mount a covert observation job from the top of the Tower - it's difficult to remain inconspicuous and undercover, when loquacious but thick talking birds are excited and asking "What are you doing, mister?" every other sentence.
From time to time some of these ravens are used as pets or familiars by wizards setting up shop away from UU, while not very bright, their ability to talk will impress most punters.

One of these ravens appears in Reaper Man, as Reg Shoe's only sentient listener while Reg is trying to raise consciousness with an impassioned speech to the dead in the cemetery at Small Gods. It is perhaps hoping for Reg to awaken something with a serviceable eyeball it no longer needs, which will spare it all that tedious digging. In the meantime, like any other resident of Ankh-Morpork, it is enjoying the street theatre, and just this once might be inclined to utter, or hint at uttering, the n-word, purely for its entertainment value...

The raven cleared its throat. Reg Shoe spun round.

The thing about ravens and eyeballs was an accident waiting to happen in Dunmanifestin, where Blind Io dispensed with the services of the traditional ravens when they just couldn't help themselves.

Ravens have also been used by pioneering broomstick pilots as in-flight black-box recorders.

There is also Raven House, one of the girls-only study houses at the Assassins' Guild school, where young ladies of Quality are taught to be perfect gentlewomen, and to inhume with style and grace, as befits their gentle ladylike qualities. If their tutelary animal is the raven, it is quite possible that Miss Smith-Rhodes teaches them that the way to a man's soul is through his eyeballs, normally with a fine stiletto or a Number One Throwing Knife.