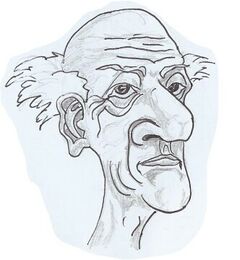 Ronald "Teach" Saveloy, as drawn by Matt Smith (with apologies to P. Kidby)

Ronald Saveloy is a teacher-cum-barbarian featured in Interesting Times. He teaches the Silver Horde about civilization so that they can peacefully conquer the Agatean Empire. Though his plan fails and he dies, the Silver Horde has great respect for him. To his surprise, he is taken to the barbarian afterlife (known to some as Valhalla) by a Valkyrie when he dies, and is given the title "Ronald the Apologetic."

Possesses a surprisingly incandescent barbarian rage; apparently, he had a lot of repressed rage built up against boys who chew gum and other miscreants from his time as a teacher.