Who's sanctuary is it anyway?

Where does this information come from? I always thought Sybil was the main person behind the sanctuary. --Sanity 00:26, 19 August 2006 (CEST)

Discovered a marvellously funny webcomic called simply 1977 (subtitled: A Rock & Roll Comic by W.Byron Wilkins). There's no direct Pratchett-related stuff, but one of the characters is a slightly embellished Bearded Lizard called Poco, who will eat anything and when alarmed breathes fire. The way he is drawn is pretty much how I'd visualise a small pet swamp-dragon!

I'll see if I can email or contact W. Byron Wilkins for permission to copy a few pictures of Poco here. As I say not Pratchett-related, so not main page material, but wonderfully evocative! AgProv (talk) 23:39, 2 March 2014 (UTC)

Cat-flaming is one of the most endearing qualities of the dragon. They can also be useful in other types of pest control.
Interesting that "A Rock & Roll Comic" is named after the year of, or after, the Death of Rock & Roll. I wonder what was intended. --Old Dickens (talk) 00:41, 3 March 2014 (UTC) 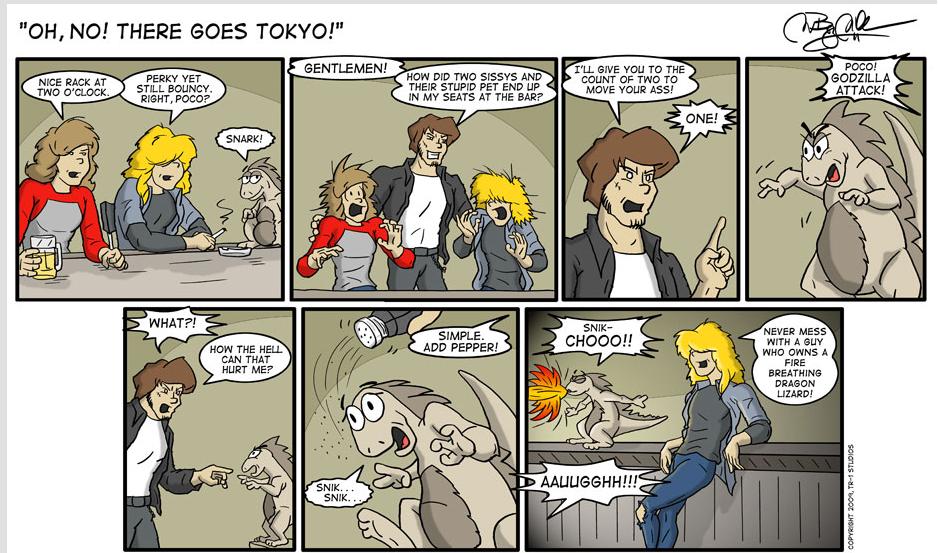 Or is it "with a purposeful grimace and a terrible sound"? No matter. Poco, the Roundworld version of the swamp dragon, saving his master from a bar fight.

Full permission for reproduction granted by Poco's creator W. Byron Wilkins who wrote to me thusly:

"Sure, go ahead! I’d be honored! A good friend of mine used to edit Pratchett’s newsletter or something along that lines, so I’m semi-familiar with his works."

The other half of the bargain: For more of Poco's adventures with the rock group Plan 9, go to the wonderfully good webcomic [1977: The comic] and be entranced and amused. Warning: definitely NSFW in many places but all the better for that.