Ankh-Morpork's main prison. This is the principal State facility, and as such is suppplemental to the Watch cells, and any local brigs or bridewells the various Guilds may maintain as a disciplinary measure (or in the normal run of commercial transaction, in the case of the Seamstresses).

The Tanty is fairly humanely run, and the stirabout has named meat in it (at least once a day). In fact, run to humane liberal principles, it offers a better standard of living than most criminals would be assured of on the outside (what with fairly clean straw to sleep on, three stirabout meals a day, at least one with named meat, and dry cells into the bargain) ...

Knowing this and keen not to provoke an unseemly queue for admission, the Patrician sees to it that stays in the Tanty are fairly short and usually end quite conclusively. With a suspended sentence, one might say...

The prison gave its name to the penny dreadful crime reportage paper, the Tanty Bugle. "Gave" is probably the key word, as it is unlikely the paper pays royalties for use of the name....

We are told in the The New Discworld Companion that the Tanty is on Ankh-Morpork's "Rim Bank", but there is no clue on The Streets of Ankh-Morpork as to where this is, whether it is a street, a region, or other location.

The New Discworld Companion tells us the Tanty is a corrupted name of the Tantiment, a former royal palace which several hundred years before the present day was converted to a prison. It also provides the information that the prison is located on the Rim Bank, which is neither marked nor referred to on The Streets of Ankh-Morpork.

The original The Discworld Companion (1994 edition) has no entry on the Tanty. What is does have, however, is an illustrated endpaper which takes the form of an expanded and more detailed Mapp of the city centre, zooming down into more street names and additional features than the small scale of the Mapp can comfortably hold.

And guess what... the Rim Bank is clearly marked. It is that part of the riverside running along the edge of the Isle of Gods between the Brass Bridge and widdershins round, possibly to The Cut. The Tanty is clearly marked as immediately adjacent to the Opera House, just across Pseudopolis Yard in the ten o'clock position. Its immediately adjacent streets are not noted on the Mapp, but the illustration in the The Discworld Companion identifies them as Body Street(on the Mapp) While the name of one street is unclear on this reproduction of the map section, it has been suggested that this text can be interpreted as Lag Lane, which fits a service road to a prison. Close examination of the original endpaper bears this out.

A block away and also facing the Opera House, just off Holofernes Street, the major road leading over the New Bridge, is a street called "The Screws". (Accomodation for prison officers?)

so now we know! 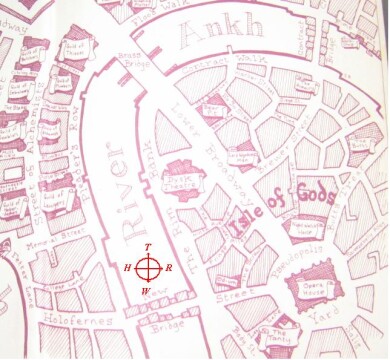