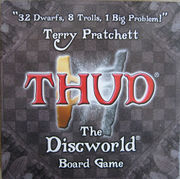 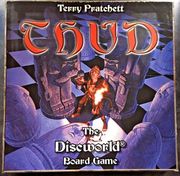 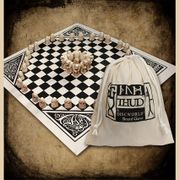 If you were looking for the book, see Thud!

Thud is a board game based on the earlier dwarfish game of Hnaflbaflsniflwhifltafl. It is played mainly by Dwarfs and Trolls, although it does have devoted human players as well. In a game of Thud, the Dwarfs' side has a natural advantage and will inevitably win against an unskilled player. A careful player can achieve victory for the Trolls, however. A match therefore consists of two games with the players alternating sides. According to Reacher Gilt, a well-played game of Thud can reveal the weaknesses of one's opponent. According to Lord Vetinari, the goal of the game should be to discover one's own weaknesses. Mr Shine hopes that encouraging Dwarfs and Trolls to play Thud will promote peace between the two by providing an outlet for replaying the Battle of Koom Valley in miniature - and bloodlessly. Greater background information is given in "Thud - A Historical Perspective".

The game itself echos the game played by Vikings and Anglo-Saxons "Hnefatafl", which literally means "Kings Table". Hnefatafl echos go beyond just the name. Like 'Thud' it is unusual in that it is an 'asymmetrical' game - each side has different forces and different objectives (unlike, say, Chess). The defending side is trying to get the King to safety and escape on a corner square, while the besiegers/attackers are trying to either capture the king, or position their forces so his escape is impossible. Making Kings safe is of course a recurring theme in The Fifth Elephant and Thud!.

The dwarven pieces on the 1st edition front cover echo the 'Lewis' chess set, often used as an inspiration for modern reproductions, as it is the only known set of a Dark Age board game. This, along with the game, reinforces the 'pop-viking' imagery Pratchett uses for dwarfs. In 2002 (on Roundworld) the game Thud was created by Trevor Truran.

There is also a another way that the game can be played called Koom Valley Thud, with new rules.

19/12/12: an episode of popular archaeological show Time Team aired on British TV, in which an Anglo-Saxon game looking very much like Thud was briefly displayed and described.