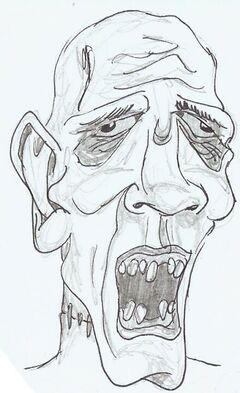 Walking corpses, many of whom are still intelligent, usually from the human species. No dwarf, gnome, pictsie, or troll zombies have been reported. Also, no zombies reported to be from ordinary animal species. Many zombies can still see, hear, smell, talk, move, think, plan, and scheme. Some can even eat. Depending on length of time since death, a zombie's flesh may look gray or green, his skin may be flaking off, he may smell rotten or smell of preservatives. When "injured", for example a finger having been cut off, a zombie does not bleed; the wound can be sewn up, but there will be no wound-healing or tissue-regeneration.

The process of death strips away all illusions, so a zombie, if he wishes, can control all his body functions extremely well, and think very clear thoughts. For this reason, a zombie can be a powerful fighter. Their bodily strength is so great that they are supposedly able to walk through walls and rip people apart just like that. Notable zombies in Ankh-Morpork include Mr. Slant the head of the Guild of Lawyers, Mr Bendy, the obituarist on The Times, and the Watchman Reg Shoe, also a dead rights activist. The zombie Baron Saturday makes an appearance in Witches Abroad.

Several reasons might cause a corpse to continue walking around and talking to people. The most prominent reason is magic. Corpses can be resurrected by application of proper spells and/or potions. Gods are also known for fiddling around with human bodies. At least one case is known, where a person (Windle Poons) continued to walk around after his death, simply because Death had not come around to collect his soul (Reaper Man). In a related fashion, some become zombies merely because their life-timers have not run out at the point of their death.

Revenants - that is, unintelligent walking corpses - have also been reported, in the Borogravian crypt for their military heroes (Monstrous Regiment). Only the unfinished war with Zlobenia keeps them "alive"; just enough sentience remains for them to recognise the Grand Duchess Annagovia manifesting through Wazzer Goom.

The idea of a grim Gothic castle used as the last resting place of a nation's great generals. Reichsführer-SS Heinrich Himmler intended the Castle of Wewelsburg to be the spiritual heart of the SS organisation. To this end, he devised and had built a crypt to hold the bodies of Waffen-SS generals who died nobly in action. Assorted post-war novels and computer games have dealt with the question of what might happen if, for whatever reason, the dead Generals of Wewelsberg refused to stay dead, and returned as vampires or zombies of varying degrees of sentience...

Stories of Roundworld zombies originated in the Afro-Caribbean spiritual belief system of Vodou, which told of the people being controlled as labourers by a powerful sorcerer. Zombies became a popular device in modern horror fiction, largely because of the success of George A. Romero's 1968 film Night of the Living Dead. Since then they have grown in popular fiction and culture into the lurching, grey-skinned, hard-to-kill, powerful creatures we find on the Disc.

It may also be noted that the difference between Zombies and Revenants are switched from their Roundworld equivalents, zombies on Roundworld are the mindless corpses while Revenants sustain much of their original sentience, being driven by revenge or some other compulsion that they were not able to complete in their first life.