A compendium of eighty-five short quizzes (answers are in a separate section at the back) to test your knowledge of all things Discworld, ranging from the relatively simple to fiendishly difficult. Presented in the style of final exam papers from Unseen University – but not the one that was intended for Victor Tugelbend, which would be pointless and silly.

Hitherto unpublished Discworld material comes in the form of a short "students' guide" to matriculation, and there is a short preface from Terry Pratchett in which, among other things, he gently deplores a certain Baconian tendency on the part of those given to mining the books for implausible annotations and associations. A sequel The Wyrdest Link was released in 2002.

"I'm told the BBC has forbidden people to take Discworld as a subject on Mastermind, which may show unusual common sense on the part of the BBC."
—Terry Pratchett, The Unseen University Challenge

An 'Official Supplement' was added by David Langford to the The Authorised Terry Pratchett's Discworld Magazine using leftover questions.

In 2005 a second edition of the book was released, updated with more questions.

Trolls have smashed down the door, there's a banshee on the roof, the river's caught fire, the librarian has turned into some kind of ape, and this is your starter for ten...

Questions about figgins, DEATH, mind-destroying footnotes, carnivorous Luggage with lots of little legs, quantum butterflies, the magico-numerical significance of what we must always call twice four or seven plus one, and even the precise sex of the Great Turtle who supports Terry Pratchett's phenomenal planet (via four elephant middlemen).

This is a quizbook for fans of fantasy and fun alike – and the ultimate challenge for all Discworld aficionados. 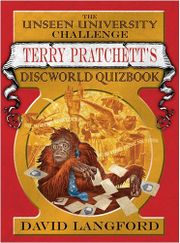