Also called 'SFX Presents the Authorised Terry Pratchett's Discworld Magazine,' this is an official magazine produced between Terry Pratchett and SFX magazine, who have previously featured reviews of Terry's work, articles by him and interviews with him. This special edition of their magazine mainly deals with the recent Cosgrove hall adaptations of Soul Music and Wyrd Sisters. Edited by M.J. Simpson. 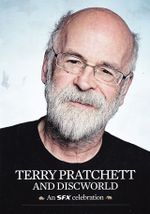 Terry Pratchett has had a long relationship with the SFX magazine who have published an number of articles written by him, some examples include: 'Sheer Delight: Tribute to Bob Shaw' article from April 1996 and 'No Worries' article from June 1998.

Issue 264 (September 2015) included a small supplementary 20 page mini magazine 'Terry Pratchett and Discworld An SFX Celebration.' A celebration of the authors works and contributions to SFX magazine. The pamphlet ended with a preview of The Compleat Discworld Atlas.

Interview with SFX on The Watch TV Series