Troll Bridge is an independent short film created by the Australian studio Snowgum Films based on the short story of the same name by Terry Pratchett.

The plot is the same as the original short story with Cohen the Barbarian making his way to Death Bridge to defeat a Troll in single combat to prove himself, however upon meeting the troll things go rather differently.

Unique to the film there is also a prologue showing Cohen in his younger days fighting in a large scale battle; Terry Pratchett aided by writing additional dialogue for this sequence.

Troll Bridge was financed through Kickstarter with donated money and production began in 2011. The project later moved to Backerkit during post-production.

In 2016 at Terry Pratchett's memorial service Snowgum Films announced that the film was nearing completion.

After completion the film is expected to tour and be exhibited at professional film circuits, after which it will be released to backers as a downloadable/streamable film and on DVD/BLU Ray.

The film premiered at the Australian international film festival Flickerfest on 16th January 2019.

In January 2021 Snowgum Films released the Complete version of the film on their Youtube channel: Troll Bridge on Youtube

The film will be released in three versions:

This area on the Troll Bridge website is accessible only by backers. It contains the three versions of the film and the bonus material available on the DVD/BLU Ray discs as well as additional material was not added to the physical releases. 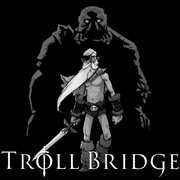