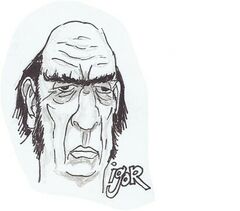 Ankh-Morporkian pub where various "people" can show their true forms and nobody will give a second glance. Perhaps one of the few locations where, when asking the bartender for a Bloody Mary, he won't simply mix you a metaphor... Clientele include vampires, werewolves, zombies, bogeymen, ghouls, Tooth Fairies, and Mrs Gammage. Mrs Gammage is purely human, a blind old widow living alone who had been patronizing this pub for decades since it was still an ordinary human pub named the Crown and Axe. The differently alive clientele of Biers look after Mrs. Gammage (see Feet of Clay). The undead customers are not exactly friendly with each other, more that they leave each other alone. On the other hand, if an ordinary human barges into the bar and makes unmeasured comments, even in solicitation for the famous Ankh-Morpork any-kind-of-service-for-money, there will be trouble from just about every drinking customer (see The Truth).

Although were-creatures of all sorts are welcomed, animals are not. In Hogfather, Igor explains to Susan "If it (Quoth) can't turn back into human on demand, it's out." However a "No change" sign (see Feet of Clay) is present, probably to avoid inconveniences including were-creatures.

Biers is a nickname for the pub, it is unknown whether the owner has a formal name for it. The monobrowed bartender is called Igor, but is not one: just try asking him to sew your head back on (see Thud!).

Biers is a multi-level pun: it has an assonance with the well-known bar "Cheers" ("where everybody knows your name" - Angua points out that Biers is where everybody knows your shape), and a bier is a stand used to hold a coffin prior to burial or cremation. This last is particularly appropriate considering the undead clientele. It may also be a reference to Ambrose Bierce, a 19th century humorist and author of various Gothic / horror novels (his best known work is "The Devil's Dictionary"). Bierce disappeared under mysterious circumstances in his 70's. while following Pancho Villa's army through Mexico and Texas, which may explain why the owner of Biers is never seen. Finally, the word "Biers" also refers to the German word "Bier" which means simply "beer".

And if you consider the original name of the pub in context with the monarchy of Ankh-Morpork...