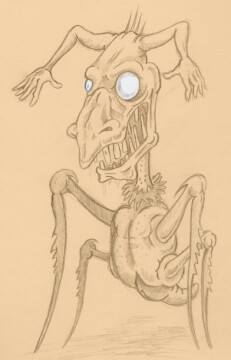 a creature of the Dungeon Dimensions by Kit Cox

The Dungeon Dimensions are the great dark dimensions less than a shadow's width away. There is endless, dry, silver sand, and it is said to be as cold as the space between the stars, and it's populated by Things that exist just enough to hate everything that has actual substance.

They crave life in a stable reality, so they try to break through into more ordinary dimensions such as the Discworld (it says something when the Discworld has a much more stable reality than the Dungeon Dimensions have). Magic weakens the boundaries between worlds, so the Creatures of the Dungeon Dimensions gather where there is a large amount of magic, waiting to break through. They also sometimes manage to come into the mind of a wizard, and these Creatures have an affinity to the number that is four-plus-four, so wizards try not to say that number (see The Discworld Companion).

They apparently cuddle around our world for light and shape, craving only the ability to exist. They could no more survive in our world than wet paper in a shredding machine, but that doesn't stop them wishing they could. If they ever did break through, the effect would be not unlike the ocean attempting to warm itself on a candle, but they haven't stopped trying yet, and they never will. They are very good at waiting.

Magic doesn't work in fighting the Things, as they feed on magic, but two other methods have been known to work; not using magic, and good old non-magical fire. When in our world, they must obey our rules, which is why they generally don't last very long, what with having far too many legs and all those organs in the wrong place. If they take on other forms, they seem to have trouble adjusting to having less legs (or eyes or arms or just having legs at all). Those few who have managed to break through home in on sources of Magic. The UU Library is a favorite.

Generally, entering the Dungeon Dimensions results in insanity, and if you do get something back, it isn't what went in. But some people come out mentally intact. Some of these people are:

These incidents are detailed in: Equal Rites, Sourcery, and Eric.

Other breakthrough attempts described in The Light Fantastic and Moving Pictures. The mall organism from Reaper Man may or may not be related to the Dungeon Things. Mustrum Ridcully predicted another incursion in Soul Music, but was mistaken. Referred to by Lord Havelock Vetinari, the current Patrician of Ankh-Morpork, in The Truth.

The Dungeon Dimensions are heavily inspired by H. P. Lovecraft.

Dark Gods of the Dungeon Dimensions

Some of these Dark Gods are:

The Sender of Eight, Bel-Shamharoth