Granny Weatherwax, full name Esmerelda "Esme" Weatherwax, is a witch, who lives in a small cottage outside the village of Bad Ass, in the kingdom of Lancre, on the Sto Plains face of the Ramtops.

She is often nicknamed just "Granny", though she is never mentioned as having any children or grandchildren. She has names in multiple languages, which reflect her reputation. These include the Troll name Aaoograha hoa ("She Who Must Be Avoided"), Dwarf name K'ez'rek d'b'duz ("Go Around the Other Side of the Mountain") and Nac Mac Feegle name The Hag O' Hags ("The High Hag,").

According to Witches Abroad, Esme Weatherwax was born the younger of two daughters. While it hasn't been mentioned if her mother was a Witch or not, Granny mentions that her father was a hunter, who once taught Granny that "a bad hunter chases, a good hunter waits" (Lords and Ladies). While Granny was practically still just a bairn, her teenaged, older sister, Lily, was getting into increasingly frequent rows with her parents over Lily's behavior, as Granny reveals to Nanny Ogg in Witches Abroad, Lily was wanton, using magic for it and not just ordinary magic, "she was wilful", as Granny describes it, able to remember her sister's and mother's rows even at that young age, that Lily was vain and prideful, ("always looking in mirrors... Prideful as a cat, she was. Prefer to look in a mirror than out of a window, she would"), and that "young men's fathers used to come round to complain", culminating in Lily being kicked out of the household at the age of 13 years.

After Granny had grown-up, she was adamant on becoming a Witch; as she reveals in Lords and Ladies, magic didn't choose her, she chose it, ("I never stood in front of no-one... I camped on old Nanny Gripes' garden until she promised to tell me everything she knew. Hah. That took her a week and I had the afternoons free. ... No I chose..."). Granny would go on to become a fully-fledged Witch, and at some point took responsibility for her own steading, the village of Bad Ass and the Kingdom of Lancre as a whole. Granny Weatherwax, as she would later come to be known, also nursed her ailing mother until the time of her death, (what became of her father has never been mentioned). Whilst still a young woman, Granny was involved in a summer-long romance with then-aspiring Wizard, Mustrum Ridcully, but ultimately they were both committed to their respective paths of Witchcraft and Wizardry.

Granny is estimated to be in her seventies during the events of Wyrd Sisters, Witches Abroad, Lords and Ladies, Mort & Carpe Jugulum, the same age as Nanny Ogg, (having grown up with her). Yet, by the standards of Mistress Eumenides Treason, she is still considered a girl (Wintersmith).

Granny Weatherwax passes away early in the events of The Shepherd's Crown, now in her 80's; where, after experiencing The Call, she tidies up her cottage, prepares her own wicker casket, and sets her last will and testament down in writing (confirming instructions she had already confided to Nanny Ogg), before laying herself to rest in her own bed one last time. When Death comes for her, he asks her if she was content with her life, with Granny confirming that she was satisfied to have lived the way she did and kept her part of the world safe, Death in turn assuring her that her candle will continue to flicker long after her passing and that she has left the world in a better condition than it was when she entered it. Her death is felt across the Disc; Nanny Ogg and Tiffany Aching arrive first to lay her to rest in the forest at a site pre-chosen by Granny herself, and Archchancellor Mustrum Ridcully visits briefly to pay his last respects. Over the course of the events of The Shepherd's Crown, Tiffany Aching, who Granny has named her successor, over-stretches herself trying to oversee two steadings and live-up to Granny's reputation as the new 'Witch of Witches', but eventually comes to accept the need to do things her way rather than simply make herself do everything Granny did.

She is considered (not least of all by herself) to be the best witch on the Discworld and is refered to by the Pictsies as the 'Hag O' Hags'. She is the resident witch of Bad Ass, but she tends to regard the whole kingdom, and indeed absolutely anywhere else she happens to be, as her rightful domain, (not unlike Adora Belle Dearheart in that respect.) Her cottage is probably the most traditional of all the witches' cottages in Lancre, complete with archaic thatch, goats, and huge thickets of 'herbs' which move even when there's no breeze. She has a special fondness for bees and keeps several hives in her garden. 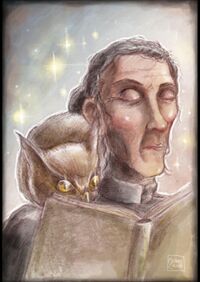 "Granny had been introduced to broomstick flying quite late in life, and after some initial suspicion had taken to it like a bluebottle to an ancient fish-head. A problem, however, was that Granny saw every flight simply as a straight line from A to B and was unable to get alongside the idea that other users of the air might have any rights whatsoever; the flight migration patterns of an entire continent had been changed because of that simple fact. High-speed evolution among local birds had developed a generation that flew on their backs, so that they could keep a watchful eye on the skies...Granny's implicit belief that everything should get out of her way extended to other witches, very tall trees and, on occasion, mountains." (Wyrd Sisters).