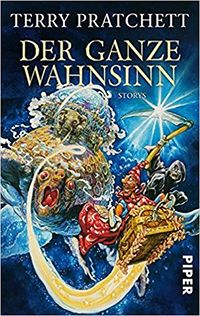 This book omits several of the essays and stories from the original, Once More* *with Footnotes, including the several essays that were written by other authors for the book. The Whole Madness: Stories compensates for this by including some material that was not present in the first one, such as the forewords written by Terry Pratchett for the Discworld computer games, The Colour of Magic, and the CD. Some other material that has not been reprinted elsewhere is also included such as Terry Pratchett's review of 'The House on the Borderland.'

This book is a German language release only and there is no English or other language release, it is also available in paperback. This book could be of value to non German speakers for several reasons: as a collectors item, for the illustrations by Josh kirby, this book in both hardback and paperback is far more readily available than Once More* With Footnotes, and finally this version is cheap, really cheap, compared to its extremely rare and expensive predecessor. As such this version may be the only chance by some Pratchett fans to at least own a version of Once More* With Footnotes without having to pay a Dwarfs fantasy in money.