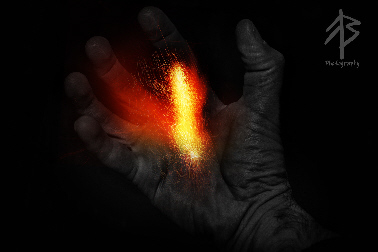 Wizard's magic is one way to practise magic on Discworld. It is practised scientifically and is therefore almost the opposite of Witches' magic. Wizards study magic for many years at a university (e.g. Unseen University or Bugarup University). They learn magic the hard way. Reading an uncountable number of books, passing hard tests, getting one (or several) of the many degrees available and practicing all day long makes a great wizard. Oh yes, and growing a beard and wearing a pointed hat also helps.

For wizards magic is science. All magic follows certain rules and if one knows the rules then one can master magic. On example is the conservation of energy (referred to as conservation of reality). Simply speaking, things have to level out at the end. If something goes up, something else has to go down. An example of this was seen in The Light Fantastic where a wizard propels himself up the the Tower of Art by causing a stone to drop from the tower's roof. It is not too hard to turn a cat into a dog, because this is simply turning one existing thing into another one. But to create things out of nothing is totally different thing and almost impossible to do for a wizard. Wizards don't seem to have figured out that they could transform air into stuff yet either.

Wizards like to use instruments specially made for the purposes of practicing magic. The wizard's staff is a familiar and intuitive example; it stores magic that wizard can use all at once. For seeing the world or even all possible times and spaces of the multiverse, the wizards have used the crystal ball and have now advanced to the omniscope which is, sadly, very expensive monetarily to produce and very expensive magically to operate. The thaumometer is an instrument to measure the amount of magic in the vicinity. They also always have a stuffed alligator, the existence of which has always been a bit of a mystery, as no-one, especially the wizards themselves, know why this seemingly random piece of occult junk always turns up in a wizard's study.

The more interested wizards (usually the younger ones) try to analyse and understand magic itself. In the High Energy Magic Building at Unseen University students together with Ponder Stibbons try to split the Thaum, the smallest magic particle known so far. Wizards just love to tamper with reality and to babble about different possible dimensions. One of the newer projects is the creation of Hex, a magical supercomputer.

The most general form of wizard's magic is encountered in form of illusions, fireballs and occasional calling of ghastly things from the Dungeon Dimensions. Wizards can store magic in their wizard's staff, which is about 6 feet long and has a knob at the end (hua, hua, hua, hmm...).

Wizards have a great disrespect for witches, because they perform magic without really knowing the science. They also think that priests and gods in general should not be taken too seriously.

In the old days wizards frequently killed each other to move up the career ladder (known in arcane circles as "Dead Man's Pointy Shoes"). At least for the wizards at Unseen University this has come to a complete stop with the new Archchancellor Mustrum Ridcully, because he likes to sneak up on people while holding a crossbow and shouting "buh", and is quite frankly deemed to be unkillable by wizardly standards. Today, wizards spend their time eating great meals at least five times a day and sleeping in between (see Reaper Man).

Sourcerers are extremely powerful wizards who can create and channel magic at will. There is almost no barrier to their power.

How to Identify a Wizard

Unlike the witches, wizards had never been discriminated against, only feared in the bad old days when there were no civic arrangements and wizards warred amongst themselves and killed whichever non-magical civilians who got in their way. Nowadays, wizards tell themselves not to attack civilians (because that would be an unsporting act); wizards don't use magic to fight amongst themselves, so there is no stray magic hitting innocent bystanders; and wizards in Ankh-Morpork even pay a voluntary contribution to the city, coincidentally equal in amount to the city tax. Nowadays, wizards are respected or looked at with slight suspicion and bewilderment, but not fear. The more famous faculty members of Unseen University are city dignitaries. The UU Archchancellor attends meetings with the Patrician just as the guild leaders and important priests do. So, wizards find it very advantageous to advertise the fact that they are wizards. Wizards like to wear pointy hats, boots with curled points, and velvet robes with a lot of mystic sigil embroidery, sequins, and ankhstone (like rhinestone but from the river Ankh, which is presumably much easier to mine). Most wizards like huge meals and become quite round-shaped by middle-age. A beard is often expected of wizards, and the lack thereof is one of the stumbling blocks for Ponder Stibbons, the youngest top faculty in Unseen University.

To summarize: When you see what appears to be a small hill with velvet pointy hat and velvet robe with too many shiny bits, you are encountering a wizard.

Orders and Levels of Wizardry

We do not know:

Orders, like their leaders and Archchancellors, rise and disappear over the years, sometimes in a natural flow, sometimes suddenly and violently. Despite their "Ancient" and "Venerable" names, most are quite recent institutions. The exception is Mrs. Widgery's Lodgers, which dates from the foundation of the University when internal dormitory space was limited (these days the magic that has accumulated over the years has made the University's internal space as complicated as an Escher drawing).

The current eight orders (mostly from The Light Fantastic):

It could be added here that the massive magical war that took place in Sourcery seriously depleted the ranks of Wizardry and the original Eight Orders. Afterward, in the hangover that followed the passing of the Sourcerer, and an awareness that it might not be wise for Wizards to shout about it too much - not to mention the accession of Mustrum Ridcully as Archchancellor - the Eight Orders seem to have declined in relative importance and influence - we hear less about the individual Orders and more about the collegiate integrity of the University as a whole. Perhaps their importance as hotbeds of plotting and mutual hatred made sense in the old, more fluid, University politics, but today, with one relatively unkillable Archchancellor, they are something of an anachronism.

Equal Rites tells us that people who can't make it as wizards may end up as (in descending order):

There are also dismissive references to enchantresses (witches with a nice set of legs) and warlocks (male witches).

Wizards appear in various supporting or leading roles in the following books in several capacities: